Sometimes I have a hard time implementing a specific solution to a problem. Sometimes I think: “If I just took a step back, I could create a tool which anybody could use to do anything!” If I do it right, nobody will ever need to write a piece of software again!

I’m not there yet, but I’d like to announce a big step on my journey: neo4j-meta_model

neo4j-meta_model is a tool for managing Neo4j graph databases in Ruby on Rails apps. A big goal of the project is to create something which, while a very powerful tool for programmers, can also be used by non-programmers. This is such an important goal that I created a Rails app (creatively named neo4j-meta_model-app) which you need only to download, install, and run to set up a user-friendly interface for working with Neo4j databases.

What does it do?

Defining the structure of your data

Models correspond to Neo4j Labels which define entity tyes like User, Product, etc… For a model, you can define

Currently neo4j-meta_model supports properties and inheritance but not validation or custom business logic.

Browsing and managing your data 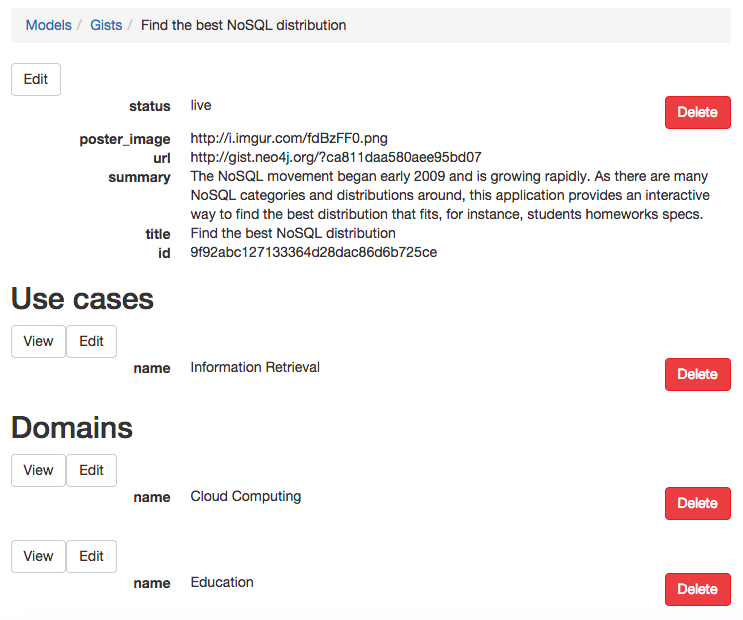 A `Gist` record with associated `UseCase` and `Domain` records

Once the database model has been established users can browse and edit the data itself. A simple CRUD interface is provided for records of the defined models. When a record is found all other records known via associations are displayed (see screenshot to the right which shows a Gist and it’s associated UseCases and Domains). When editing a record properties can be edited but associations can also be selected to create/destroy relationships. For has one relationships this is done via a simple drop-down, but for has many relationships an add/remove list interface is provided.

I’ve deployed an instance of neo4j-meta_model-app at http://neo4j-meta-model-app.herokuapp.com/ so that you can play around with it. Let me know what you think and if you have any issues feel free to report them on the project page!

The admin side of the engine is built as an Ember.js application, while the CRUD record management side is built with standard Rails server-side rendering (with a touch of Rivets.js and Backbone.js where needed)

The current version of this project is a bare bones starting point. Some things that I’d like to see in the near future: